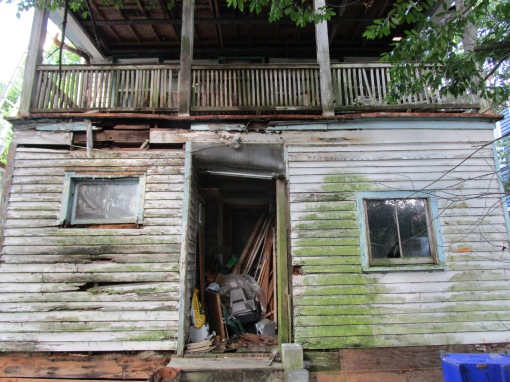 Just as promised, I’m back with a story that is fitting for the season. As the title indicates, I’ve had a few hints along the way that Sutherly might be, well let’s just say a little “spiritual”. I’ve been wanting to share these happenings with you but I thought it would be more fun to save them until the season of ghosts and goblins to give them their maximum impact!

It all started a couple of months ago when I was at the house taking photos of the new porch ceiling. Mind you there was no electricity in the house for a light to be on. There was no glass for a reflection except the glass you see on the side lights of the front door. There was no one inside the house with a flash light or anything reflective.

I took the photos and went about my way. Later that day when I uploaded them to my computer, this is what I saw.

I bet your thinking, “What in the heck?” That’s what I was thinking! If you look closely you will see a sort of  web of light around this orange orb. Let’s just say, it had my attention.

I showed it to a few people with out much of a response from anyone. Everyone dismissed it with comments like, “That must be some sort of reflection.” Others would say, “Someone must have been inside with a light and you didn’t notice. Their tunes changed a bit after I looked back through my photos and found this one taken a few frames after the one above.

If that was someone inside with a light or a reflection from inside, how did it get outside on the front porch?! Please answer that question. Well, I finally had everyone’s attention. No one had an answer. Everyone suddenly seemed more interested.

Before I could share this with you I had to explore other possibilities. Even though I have taken thousands of photos for Carolina Coaster Company,  I have never had anything near to this happen. I had to ask my friend, Mike Nocher what he thought. He is a much more experienced photographer than I. I was pretty sure that he was going to give me a logical explanation as to what caused this image to appear in the photos. Yes, I was afraid he was going to kill my ghost story. But it had to be done.

NOT! He was just as dumbfounded as me! He said he had never seen anything like it before. He even wanted copies so he could do his own research. Thank goodness! I don’t know why, but for some strange reason I think it’s sort of fun to think that Sutherly might be haunted. Well, let’s not use that word. Let just say, she is spiritual and leave it at that.

So what do I do next? I called the son of the previous owner. I started the conversation saying that I am writing a Halloween blog about the house when he interrupted me and said, “Oh yeah, she’s haunted.”

Well, what makes you think that?  He proceeded to tell me about a time his sister and a friend had their photograph taken in front of the fireplace that had a mirror above it. When the photos were developed there was a human face in the mirror along side them.They couldn’t place it to anyone they knew. They just knew it was human.

Scared to death, he decided to call his friend to come and help him investigate. When he arrived, they went upstairs armed with golf clubs. They searched every nook and cranny, even the attic, and did not find a thing.

He went on to say that despite those occurrences he never felt any bad feelings about the house. He said he always felt safe and sound there. That was nice to hear.

Now folks, I’m not saying that I 100% believe that any of these stories or even the pictures are evidence of the supernatural. I just think  that it makes owning a 100 year old house a little more interesting if there might be friendly spirits floating around. After all, what would a Charleston home be without a little built in entertainment?

Well, that’s it for now. Until next time, y’all take care!

Sidebar: As for today’s title, “Haunted House” please allow me to share a little story with you. As most of you know, the title for each blog is a song. Music is a very important part of my life and it gives me pleasure to combine the two in this forum. Sometimes the title is easier to come up with than others.

This time was not so easy. I thought of the obvious “Ghost Busters” or Kirk Cobain’s “Feels Like Teen Spirit” or Bobby Vee’s “The Night Has A Thousand Eyes”. None seemed to fit.

Then, one night as I was laying in bed I remembered an old 45 I used to play on my mom’s record player. Her love of music, I am certain, is why I love music so much. The song was called “Haunted House” by a one hit wonder named Gene Simmons. PERFECT! If you haven’t listened to any of the songs on previous posts, in the spirit of the season, please listen to this one. It is so fitting and just too adorable to pass up. I think you will like it..

Just a couple more pics for our “Haunted House” edition!

The guys found this little fellow last spring during the demolition. We gave him to our friend’s son who took him to school for science class. He was a big hit. They named him Dusty. 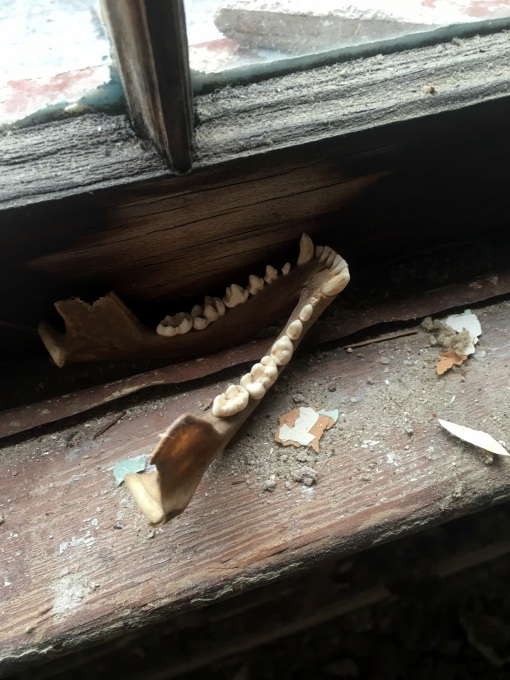 Your guess is as good as ours. 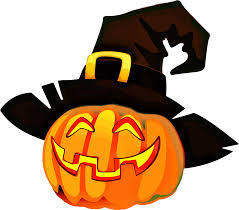